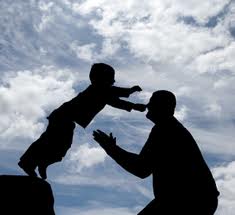 As you read these quotes, take a moment and thank God for the special men in your life!

“The most important thing a father can do for his children is to love their mother.” Theodore Hesburgh, Catholic Priest and President Emeritus of the University of Notre Dame

“Any man can be a father. It takes someone special to be a dad.” Unknown

“A man’s children and his garden both reflect the amount of weeding done during the growing season.”Unknown

“I cannot think of any need in childhood as strong as the need for a father’s protection.” Sigmund Freud

“A truly rich man is one whose children run into his arms when his hands are empty.” Unknown

“Small boy’s definition of Father’s Day: It’s just like Mother’s Day only you don’t spend so much.”  Unknown

“A father is a guy who has snapshots in his wallet where his money used to be.”  Unknown

“Life was a lot simpler when what we honored was father and mother rather than all major credit cards.” Robert Orben

“If the new American father feels bewildered and even defeated, let him take comfort from the fact that whatever he does in any fathering situation has a fifty percent chance of being right.” Bill Cosby

…and in honor of my son-in-law, Justin LoBello who played collegiate baseball for years!

Jimmy Piersal, on How to Diaper a Baby “Spread the diaper in the position of the diamond with you at bat. Then, fold second base down to home and set the baby on the pitcher’s mound. Put first base and third together, bring up home plate and pin the three together. Of course, in case of rain, you gotta call the game and start all over again.”